I adore the Timothy Wilde series by Lyndsay Faye. It’s a great set of mysteries that teaches you more than a little about the history of the New York police department. It’s also a wonderful showcase for minorities including a main character with mental health issues. (warning this blog post has all sorts of spoilers for the series)

The first book, The Gods of Gotham, introduces Timothy Wilde, barely survives a great tenement fire and finds himself destitute and without a job. It seems no one wants to buy beers from a bartender so badly scarred they can’t stand to look at him. Without other prospects he joins the Copper Stars, the first New York City Policeman. Timothy is free of prejudice, having listened to the tales of drunks of all kinds, his best friend is black, his brother, Valentine, is bisexual, and there’s Mercy, the girl he loves.

Mercy Underhill is prone to flights of wild fantasy. Most of these can be contained in her writing, a secret career we don’t learn about until the end of the first book but the rest plague her. Her father has similar delusions that he relates to his own career as minister. Before the end of the series Timothy (and the reader) realizes that both of them suffer from mental illness – likely a dissociative disorder or schizophrenia (a breakdown in the logical thought process). But the book surprises by not treating that as the single thing that defines either character. Mercy has plans for her future, makes difficult decisions, and loves Timothy. Her illness is neither the sole focus of her being nor trotted out once and then completely forgotten.

The first mystery, The Gods of Gotham, centers on a series of kidnappings where the victims are Catholic children forced to work as prostitutes. One of the children, Birdie, survives to become a part of Timothy’s life and her past is handled beautifully. In the third book as she starts dating, Timothy acts as an ersatz-father. He behaves exactly as any father would, without ever blaming or shaming her for her past.

The second story, Seven for a Secret, focuses on the horrible acts of slave-catchers who prowl New York looking for escaped blacks and unwary freedmen, who they sell back into slavery. The novel avoids the concept of the great white savior, instead showing a community not interested in outside interference. While the mystery of a stolen black family unfolds Faye explores the idea of justice at a time when the legal thing to do is the most immoral. 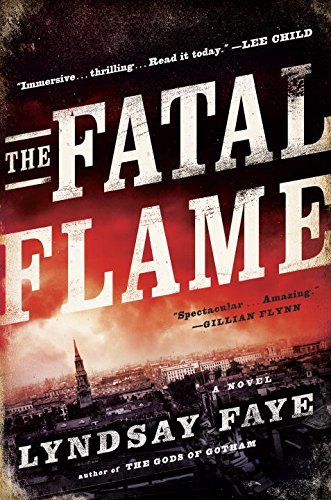 The final novel, The Fatal Flame, brings Mercy’s mental illness to center as she and Timothy work together to solve a series of arsons. Mercy has taken in an orphan who is also mentally disabled; despite this the girl might be the key to solving the mystery. More importantly she’s a wonderfully developed character. The book is stuffed with them actually: sex workers who aren’t vilified or defined by their profession, recent immigrants who aren’t stupid despite not being assimilated yet, and as many different ethnicities and religions as there were in New York in the 1840s.

My first read of the series was a protracted thing, a year between novels is a bit long for the dense, rich, historic details. I’m looking forward to reading them again, in rapid succession. Some desserts are best gulped down.